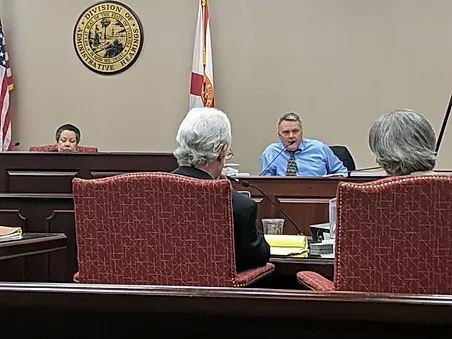 Excerpts from a story by Bruce Ritchie reporting for Politico

TALLAHASSEE — A scientist with the Department of Environmental Protection testified Friday that his agency’s plans won’t reduce pollution enough to restore Florida’s springs along the Suwannee River.

Tom Greenhalgh, who has been a hydrogeologist at the department for 31 years, was among the groups and individuals who filed legal challenges to state cleanup plans for five springs systems. He testified during a two-week administrative hearing on the challenges that began Tuesday.

DEP in 2018 proposed plans required under state law to reduce nitrogen in groundwater flowing into many of Florida’s largest springs. Nitrogen from sources including fertilizer, septic tanks and livestock operations has caused the springs to become choked with algae while groundwater pumping has reduced their flows.

Greenhalgh testified that, since he was young, the lush aquatic vegetation — along with many of the fish — have disappeared from the Suwannee River’s springs.

The sandy soils of the region and porous limestone cause fertilizer absorbed into rain water to drain quickly into the underlying aquifer, Greenhalgh said.

But agricultural practices that the state relies on to forecast nitrogen reductions in groundwater — a key component of the existing cleanup plans — have not been scientifically verified as effective, he testified.